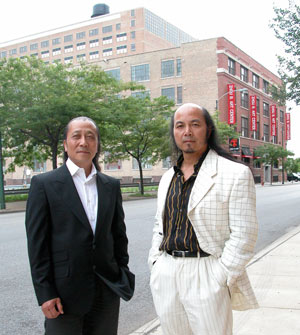 The Zhou Brothers are Chinese contemporary artists ShanZuo and DaHuang Zhou. ShanZuo was born in Nanning, Guangxi Province, China in 1952 and DaHuang was born in Wuming, Guangxi Province, China in 1957. They were both educated and trained in China and together they started their art career in 1973 and have been working collaboratively since. The Zhou Brothers moved to the United States in 1986 after having been at the cutting edge of the contemporary art movement in China in the 70’s and 80’s. The style of the Zhou Brothers’ work is often very abstract and has roots in the images of Chinese cave paintings. Later in their career they incorporated more Western influences into their work. The Zhou Brothers have gained many awards and honors in their career in both the United States and abroad.