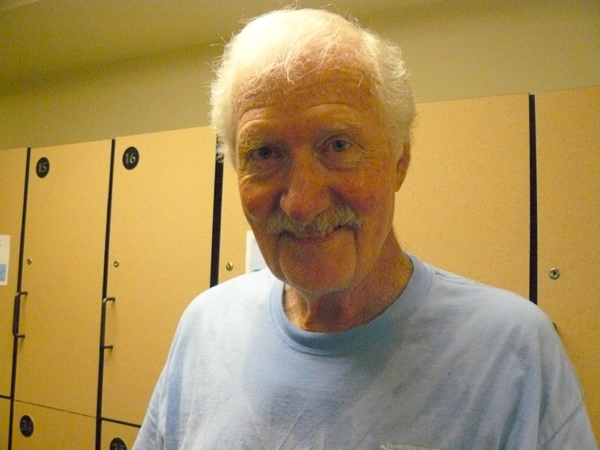 Since Wayland Moore has worked so effectively in the sports idiom, reference to him as an “artistic triple threat” would not be an inappropriate analogy. He has not only reached a height plateau of competency, he as received critical acclaim as an illustrator, cartoonist and painter.
As an illustrator, much in demand, he is one of the few Southerners belonging to the Society of Illustrators of New York. In 1967, his work for the Sarasota, Florida Herald-Tribune won him a nomination for a Pulitzer Prize in editorial cartooning.

After graduation from high school in Belton South Carolina where e received his first art training, Moore majored in commercial design at the Ringling School of Art in Sarasota, Florida. Since graduation he has worked he has worked for a design house in Greenville, South Carolina as art director for an NBC-TV affiliate, art director for the Sarasota Herald-Tribune and as senior illustrator with an Atlanta studio. In 1971 he opened Wayland Moore Studios which is located at Atlanta Stadium where Moore serves as graphics director for the Atlanta Braves, combining his career interests in art with his leisure time love of sports.

In addition to the Pulitzer Prize nomination, is a book consisting of his Florida Sketches, a front page cartoon that is included in the permanent collection of Walt Disney Studios in California, a scholarship offered in his name by the Ringling School of Art and a string of artistic assignments that have included coverage of the Indianapolis 500, PGA Golf Tournaments, Can-Am races and, perhaps the greatest spots hustle of all time, the Billie Jean King-Bobby Riggs tennis match in Houston’s Astrodome.
An athlete who paints, Wayland Moore has achieved preeminence in the sports world through a multi-faceted background. A football player who turned down athletic scholarships to attend the Ringling School of Art. A Pulitzer prize nominee for editorial cartooning who became Graphics Director for a major league baseball team. But, most important, an artist with the ability to capture a moment without freezing it – the ability that only comes from having “been there” as an athlete.

Wayland Moore is a native of Belton, South Carolina and a graduate of the Ringling School of Art & Design in Sarasota, FL. His commisions and assignments have brought him international acclaim as an artist who captured the excitement of events such as the Winter and Summer Olympics, America’s Cup, US Open, the Masters, PGA, US Olympic Hall of Fame, Maccabiah Games of Israel, David Cup and many other international events.
Moore has exhibited in numerous one-man shows throughout the US and Europe. His original works and limited edition prints hand in private and corporate collections and he is listed in Who’s Who of American Art.

The artist’s studio has been the hot and dry brush of Africa, often only yards away from lions, zebra and wildebeest; and his palette has captured the excitement and intrigue of the white waters of Alasks, Montana rodeos and European landscapes.

In addition to Moore’s reputation as an artisit, he conducts workshhops and has taught painting in evening classes at Emory University for over 15 years. His concept of teaching art to federal inmates earned him a commendation from the White House. He is in demand as a lecturer and is a powerful storyteller whoe company is always treasured, whether it be in offices, galleries or around a warm campfire.